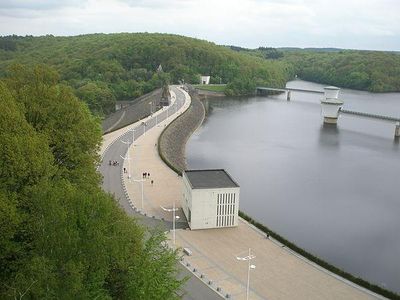 The Gileppe Dam is an arch-gravity dam on the Gileppe river in Jalhay, Liège province, Wallonia, Belgium. It was built in the 1870s to supply water for the wool industry in nearby Verviers. The monumental structure with its unusually thick profile played an important role in establishing an international standard for masonry gravity dams as a technology for major water supply systems. It was considered one of the strongest dams in Europe at the time, and it was the first dam built in modern Belgium. In the first decade of the 21st century, it was noted as supplying most of the drinking water for Verviers, as well as industrial water, and as producing hydroelectricity.
In the 19th century, the dam was built to ensure the water supply for Verviers, the center of the wool industry in Belgium. Wool was imported through Antwerp and washed at Verviers, situated between the Ardennes and Belgium's Carboniferous region, before it was shipped for manufacture in Germany and Austria. Wool washing was facilitated by the high acidity of the water. Originally, the industry's water source was the Vesdre river, which proved to be insufficient; moreover, water was returned to the river so polluted that it destroyed the fish population and was blamed for the spread of malaria downstream. In the summer, when water levels were at their lowest, the industry faced shortages, and the local population relied on a limited supply of drinking water from springs. A dam was proposed, with studies to be undertaken by the engineer Bidaut. The goal was to provide the river Vesdre with about 3,000,000 cubic metres of water for the year, and 14,600,704 cubic metres to industry . After delays, a design was submitted in 1868 to the Minister of Public Works.