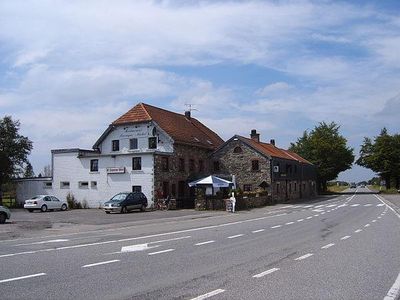 The Baraque Michel is a locality in the municipality Jalhay, in the High Fens, eastern Belgium. Before the annexation of the Eastern Cantons by Belgium in 1919, it was the highest point of Belgium. Now it is the third highest point at 674 metres , after the nearby Signal de Botrange ) and the Weißer Stein ).
The Baraque itself is an inn and the starting point of many excursions. The Baraque Michel was founded between 1811 and 1813 by Michel Schmitz, of Herbiester , already as an inn, but also as refuge for stray travellers: a bell was sounded there during fog, which allowed the rescue of more than one hundred people during the 19th century.