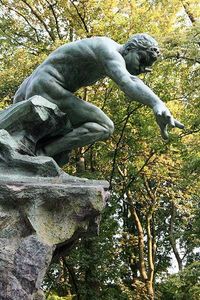 Josaphat Park is a public park of 20 hectares located in the municipality of Schaerbeek in Brussels. The football stadium that was formerly used by the K.V.V. Crossing Elewijt lies on the north-west corner of the park. There is also an elementary school , a tennis club and some ponds.

The park is a remainder of the old Linthout forest that began at Dailly square. It was designed by Edmond Galoppin of Melsbroek and inaugurated by King Leopold II of Belgium on 6 June 1904. Its name comes from the resemblance between the valley of the Roodebeek where the park is located and the Valley of Josaphat in the Holy Land, noted by a pilgrim back from Palestine in 1574. It was designated on 31 December 1974.