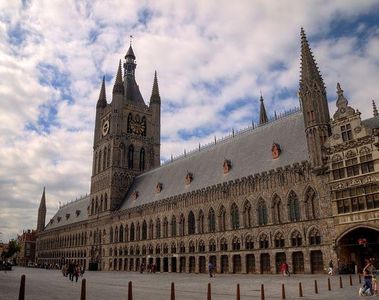 The Cloth Hall is a large cloth hall, a medieval commercial building, in Ypres, Belgium. It was one of the largest commercial buildings of the Middle Ages, when it served as the main market and warehouse for the Flemish city's prosperous cloth industry. The original structure, erected mainly in the 13th century and completed 1304, lay in ruins after artillery fire devastated Ypres in World War I. Between 1933 and 1967, the hall was meticulously reconstructed to its prewar condition, under the guidance of architects J. Coomans and P. A. Pauwels. At 125 metres in breadth, with a 70 metres -high belfry tower, the Cloth Hall recalls the importance and wealth of the medieval trade city. The building now houses the In Flanders Fields Museum.

In a row spanning the front of the edifice are tall pointed arches that alternately enclose windows and blind niches. Before the Great War, the niches framed life-size statues of historical personages, counts and countesses of Flanders. The niches on the side wings are now mostly vacant, but those in the centre contain statues of Count Baldwin IX of Flanders and Mary of Champagne, legendary founders of the building; and King Albert I and Queen Elisabeth, under whose reign the reconstruction began. Situated between these two couples, directly above the central archway entrance or Donkerpoort, is a statue of Our Lady of Thuyne, the patron of Ypres.