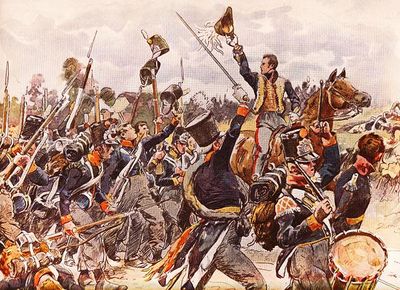 The Battle of Quatre Bras was fought on 16 June 1815, as a preliminary engagement to the decisive Battle of Waterloo that occurred two days later. The battle took place near the strategic crossroads of Quatre Bras and was contested between elements of the Duke of Wellington's Anglo-allied army and the left wing of Napoleon Bonaparte's French Armée du Nord under Marshal Michel Ney. While the battle was tactically indecisive, Napoleon achieved his larger strategic aim of preventing Wellington's forces from aiding the Prussian army at the Battle of Ligny, which the French won the same day.

Facing two armies , Napoleon's overall strategy was to defeat each in turn, before these forces could join. Napoleon intended to cross the border into what is now Belgium without alerting the Coalition leaders and drive a wedge between their forces. He planned to defeat the Prussian army, forcing them to retreat eastward, and then turn to engage Wellington, driving his army back to the Channel coast.