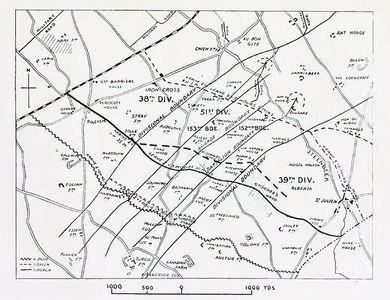 The Battle of Pilckem Ridge was the opening attack of the Third Battle of Ypres in the First World War. The British Fifth Army, supported by the Second Army on the southern flank and the French First Army on the northern flank, attacked the German 4th Army, which defended the Western Front from Lille northwards to the Ypres Salient in Belgium and on to the North Sea coast. On 31 July, the Anglo-French armies captured Pilckem Ridge and areas either side, the French attack being a great success. After several weeks of changeable weather, heavy rain fell during the afternoon of 31 July.

In the XIX Corps area in the centre and on the right of XVIII Corps, three reserve brigades advanced from the black line to the main objective and pressed on towards the red line, the furthest that exploitation on local initiative was allowed for in the plan. The weather changed and rain began to fall, cutting off the advanced British troops from view, just as German regiments from specialist counter-attack Eingreif divisions advanced over Passchendaele Ridge. To avoid being rolled up, the reserve brigades retreated through the green line to the black line, which the British artillery-observers could still see; the German infantry was prevented from advancing further by massed artillery and small-arms fire.