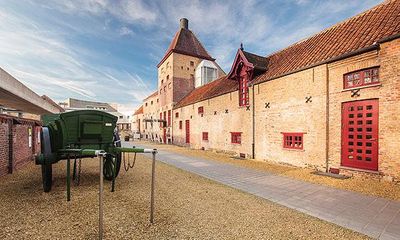 In the malting tower of the Old Brewery site in Koekelare a new museum has been built up around a collection of graphic works by the well-known German artist Käthe Kollwitz (1867-1945). She has been associated with this area for many years. Her son Peter was killed near here during the war and until the 1950s her famous statues of 'The Grieving Parents' stood in the German military cemetery at Roggeveld, symbolising the loss of all German youth.

Later, the burials at Roggeveld - including Peter's - were transferred to the concentration cemetery at Vladslo, along with the statues. During your visit to Vladslo - just a few kilometres from here - you can read about Käthe's grief via this app.