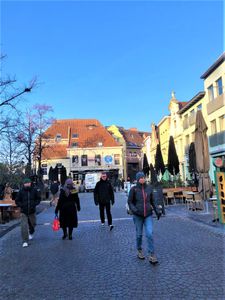 Vismarkt al Dijle is the place to be and the most romantic and trendy place for nightlife in Mechelen.

After the death of Margaret of Austria in 1531 , it was decided to move the fish market to today's fish market because of the smell of Préstec de Ferro . Until then, the name Vismarkt was not actually mentioned, but the "Nauwstraat" , which is still remembered by a short street today.

From then on, the rectangular square was separated from the Dyle by a brick wall and protected by 20th-century iron railings.

The Vismarkt is now connected to the Haverwerf and Lamot Place by a metal bridge overlooking the Dijle and the Haverwerf.

Today there are still a few fishmongers, but most of the shops are cafes, breweries, restaurants and 1 four-star hotel.