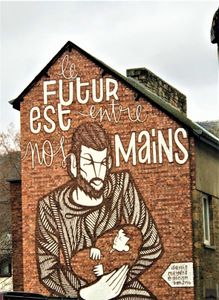 This mural was made by Denis Meyers as part of BAM 2014.

Denis Meyers was born in Tournai in 1979 but lives and works in Brussels. A versatile urban artist , he is known for his frescoes and stickers in the form of faces (which he calls his "persona" ).

In 2014 , a group of volunteers passionate about art and culture decided to organize the first edition of the BAM festival in La Roche-en-Ardenne, a totally free contemporary art festival with a mix of exhibitions, concerts and philosophy

In addition to these exhibitions , there were concerts, philosophy hikes and conferences.