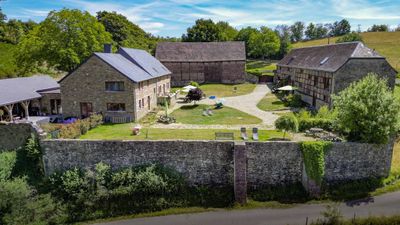 Not much remains of the original buildings . The high walls of the courtyard's fortress are reminiscent of the turbulent history of bygone times with knights, cruisers and their immeasurable treasures... the Grail.

The Templars were founded by Hegues de Payen in 1118 after the First Crusades . The order consisted of soldier monks whose main duty was to protect pilgrims on their way to Jerusalem . By fulfilling this noble task , the Order received numerous bequests and donations and became influential and very wealthy. So influential that Pope Clementine V decided to end the order. On Friday October 13, 1307, a large number of Templars were burned at the stake . Among them Jacques de Molay, the last Grand Master of the Templars.

After his return from the Crusades in 1150 , Jean l'Croisé, lord of Somal, gave the domain "Leuze" to the Order of the Templars, which is mentioned again in history in 1255, but now as "Commanderie ''Templars of Leuze''. Currently there is a farm, a watermill and a chapel on this domain.From 1314 the buildings passed into the hands of the Hospitallers of the Order of Sant Joan.

Today it is a B&B with holiday apartments.