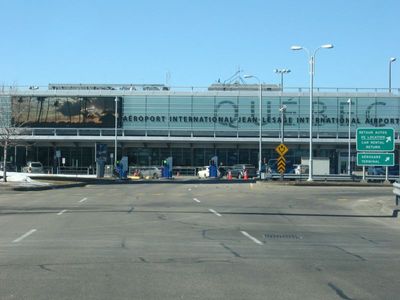 Québec City Jean Lesage International Airport, also known as Jean Lesage International Airport (French: Aéroport international Jean-Lesage de Québec, or Aéroport de Québec) (IATA: YQB, ICAO: CYQB) was established in 1939, a year after the closure of the Aérodrome Saint-Louis. It is located 6 nautical miles (11 km; 6.9 mi) west southwest of Quebec City, Quebec, Canada. First established as a training facility for air observers, the first flight occurred on September 11, 1941. It is the second busiest passenger airport in Quebec after Montreal-Trudeau airport and the third busiest airport by aircraft movements in Quebec after Montreal-Trudeau and Montreal-Saint-Hubert, with 1,342,840 passengers and 133,675 aircraft movements in 2012.