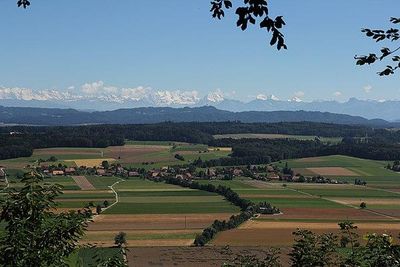 Mülchi is a former municipality in the Bern-Mittelland administrative district in the canton of Bern in Switzerland. On 1 January 2014 the former municipalities of Mülchi, Büren zum Hof, Etzelkofen, Grafenried, Limpach, Schalunen and Zauggenried merged into the municipality of Fraubrunnen.
The village was originally owned by the Count of Buchegg. During the 14th century the village and the local low court were owned by a succession of Bernese patricians including the von Greyerz, Leissigen, Esche and Stettler families. At the same time, several religious organizations owned rights or properties. In 1488 Bern acquired half of the court of Mülchi from the college of canons of the city's cathedral. The city acquired the rest of the court when the canton adopted the Protestant Reformation and secularized Interlaken Abbey. The high court over the village was in Zollikofen until 1803 when it was assigned to the court of Fraubrunnen.