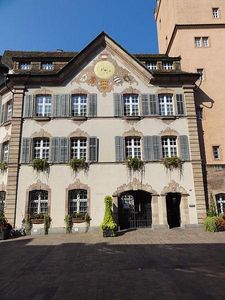 Rheinfelden is a municipality in the canton of Aargau in Switzerland, seat of the district of Rheinfelden. It is located 15 kilometres east of Basel. The name means the fields of the Rhine, as the town is located on the High Rhine. It is home to Feldschlösschen, the most popular beer in Switzerland. The city is across the river from Rheinfelden in Baden-Württemberg; the two cities were joined until Napoleon Bonaparte fixed the Germany–Switzerland border on the Rhine in 1802 and are still socially and economically tied.

The old town of Rheinfelden lies on the left bank of the Rhine, where the river is divided into two arms by the "Inseli", a roughly 150 metres long island. Downstream of the Inseli and the Rheinbrücke, the river bottoms drops to about 30 m deep, creating a huge and deadly vortex, known as the St-Anna-Loch. Nearly 400 m east is the Magdenerbach.