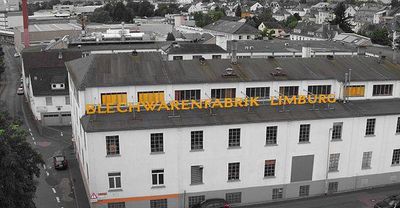 The town lies roughly centrally in a basin within the Rhenish Slate Mountains which is surrounded by the low ranges of the Taunus and Westerwald and called the Limburg Basin . Owing to the favourable soil and climate, the Limburg Basin stands as one of Hesse's richest agricultural regions and moreover, with its convenient Lahn crossing, it has been of great importance to transport since the Middle Ages. Within the basin, the Lahn's otherwise rather narrow lower valley broadens out noticeably, making Limburg's mean elevation only 117 m above sea level.
Limburg forms, together with the town of Diez, a middle centre but partially functions as an upper centre to western Middle Hesse.