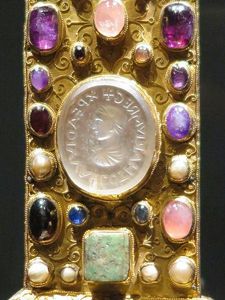 The Cross of Lothair or Lothair Cross is a crux gemmata processional cross dating from about 1000 AD, though its base dates from the 14th century. It was made in Germany, probably at Cologne. It is an outstanding example of medieval goldsmith's work, and "an important monument of imperial ideology", forming part of the Aachen Cathedral Treasury, which includes several other masterpieces of sacral Ottonian art. The measurements of the original portion are 50 cm height, 38.5 cm width, 2.3 cm depth. The cross comes from the period when Ottonian art was evolving into Romanesque art, and the engraved crucifixion on the reverse looks forward to the later period.
The Cross takes its name from the large engraved greenish rock crystal seal near its base bearing the portrait and name of the Carolingian ruler Lothair II, King of Lotharingia , and a nephew of Charles the Bald. The cross was actually made over a century after Lothair’s death for one of the Ottonian dynasty, the successors of the Carolingian dynasty; possibly for Otto III, Holy Roman Emperor. It appears to have been donated to the Cathedral as soon as it was made.