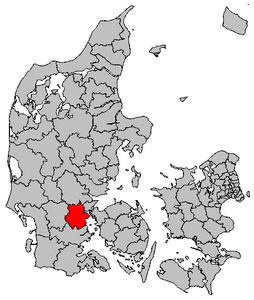 Kolding municipality is a municipality in Region Syddanmark on the east coast of the Jutland peninsula in southeast Denmark. The municipality covers an area of 640 km², and has a total population of 87,781 . Its mayor is Jørn Pedersen, a member of the Liberal Party political party. The main city and the site of its municipal council is the seaport city of Kolding, the sixth largest city in Denmark.

To the east is a strait, first called Snævringen and then further south Bredningen , that separates the Jutland mainland from the island of Funen in this area, where the two lie very close to each other, often less than 1.5 km apart. Snævringen is an extension of the Kattegat, and begins near the cities of Fredericia and Middelfart, north and east of Kolding municipality. As Snævringen broadens it becomes Bredningen, which opens out into the Little Belt , the main strait between Jutland and Funen. The municipality of Middelfart on the other side of Snævringen is thus Kolding's municipal neighbor to the east. The island of Fænø lies in Snævringen between Kolding and Middelfart.