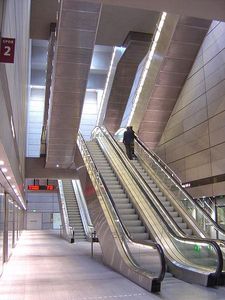 Kongens Nytorv is a rapid transit station on the Copenhagen Metro in Copenhagen, Denmark. It is located under Kongens Nytorv plaza and is part of fare zone 1. It is currently under reconstruction due to an expansion of the metro lines but the station is still open and operated during the expansion work. It provides direct access to the Magasin du Nord department store.

Kongens Nytorv station opened as part of the initial segment of the Copenhagen Metro, with trains running west to Nørreport and east to either Vestamager or Lergravsparken. Construction for the City Circle Line, which will carry the M3 and M4 Lines and for which Kongens Nytorv will act as an interchange, began on 4 October 2009 with wire work and archaeological sites. The excavation is expected to begin in mid-2011 and the station is expected to be completed in 2018.