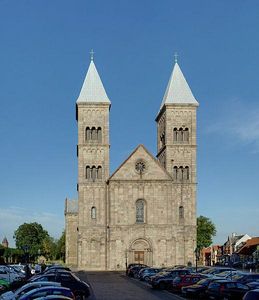 Viborg Cathedral, Our Lady Cathedral is the site of one of Denmark's most important historic churches located in the town of Viborg in northern Jutland. The modern building is a 19th-century construction based on Lund Cathedral in southern Sweden which bears no resemblance to the medieval cathedral that stood on the site since 1130.

The town of Viborg was one of the four major centers for religion and politics in ancient Denmark. As early as 800, there was a Viking Era settlement at Viborg which lies in north central Jutland with connections to the Limfjord, an important water through Jutland until modern times.