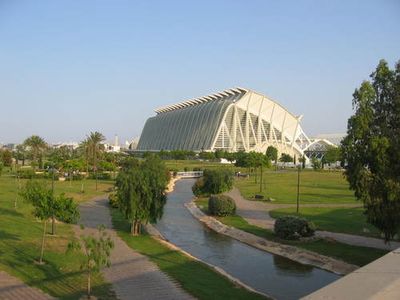 After a catastrophic flood in 1957 which devastated the city of Valencia, the Turia river was divided in two at the western city limits. The old riverbed is now a verdant sunken park that allows cyclists and pedestrians to traverse much of the city without the use of roads. The park, called the 'Garden of the Turia' (JardÝ del T·ria/JardÝn del Turia) boasts numerous ponds, paths fountains, flowers, football pitches, cafÚs, artworks, climbing walls, an athletics track, a zen garden and more. The many bridges overhead carry traffic across the park.