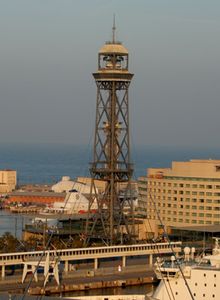 Torre Jaume I is a 107 meter (351 feet) high steel truss tower in Barcelona, which was built in 1931 by Carlos Boigas. The tower is the second-tallest aerial tramway support pillar in the world, and is a part of the aerial tramway from Torre Sant Sebastia to Montjuïc. Torre Jaume I also has an observation platform.