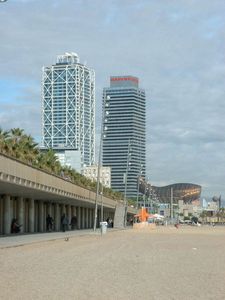 The Hotel Arts is a 43-story, 600 room luxury hotel on the seafront of Barcelona. Contrary to popular belief, it was not built to service the 1992 Summer Olympics, though its construction was part of the big changes underwent by the city to prepare the Games. It remains one of the city's leading hotels. It is operated by the acclaimed Ritz-Carlton hotel chain. Construction was finished in 1994 and it is an example of structural expressionism architecture. Next to the building, there is Torre Mapfre. Torre Mapfre holds the title for highest helipad in Spain at 505 feet above ground. Unlike its twin, Hotel Arts Barcelona this tower is a mixed use tower.