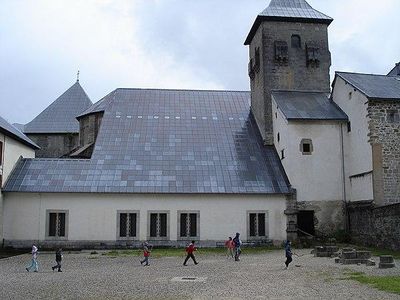 Roncesvalles , Spanish: [ronθezˈβaʎes]; Basque: Orreaga [oreaɣa]; Aragonese: Ronzesbals [ronθezˈbals]; French: Roncevaux [ʁɔ̃svo]) is a small village and municipality in Navarre, northern Spain. It is situated on the small river Urrobi at an altitude of some 900 metres in the Pyrenees, about 4 kilometres from the French frontier as the crow flies, or 21 kilometres by road.

Roncesvalles is famous in history and legend for the death of Roland in 778, during the battle of Roncevaux Pass, when Charlemagne's rear guard was destroyed by Basque tribes.