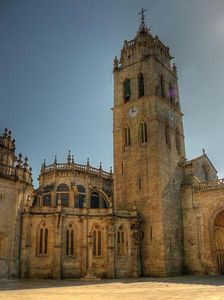 Saint Mary's Cathedral , better known as Lugo Cathedral, is a Roman Catholic church and basilica in Lugo, Galicia, north-western Spain. The cathedral was erected in the early 12th century in a Romanesque style, with Gothic, Baroque and Neoclassicist elements.

A church existed in the site from 755. In 1129 Bishop Peter III commissioned a new edifice in the latest architectural style from Raimundo, a local architect and builder. This Romanesque structure was completed in 1273.