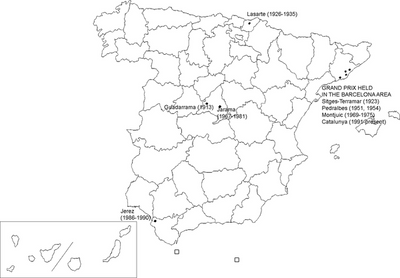 The Spanish Grand Prix is a Formula One race currently held at the Circuit de Barcelona-Catalunya. The race is one of the oldest in the world still contested, celebrating its centenary in 2013. The race had modest beginnings as a production car race. Interrupted by the First World War, the race waited a decade for its second running before becoming a staple of the European calendar. In 1927 it was part of the World Manufacturers' Championship; it was promoted to the European Championship in 1935 before the Spanish Civil War brought an end to racing. The race was successfully revived in 1967 and has been a regular part of the Formula One World Championship since 1968 at a variety of venues.

The first Spanish Grand Prix in 1913 was not actually run to the Grand Prix formula of the day, but to touring car rules, taking place on a 300-kilometre road circuit at Guadarrama, near Madrid, on the road to Valladolid.