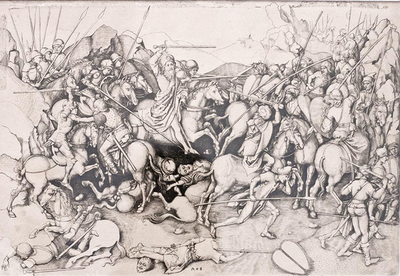 The Battle of Clavijo is a mythical battle. "To a serious historian, the existence of the Battle of Clavijo is not even a topic of discussion". However, it was believed for centuries to be historical, and it became a popular theme of Spanish traditions regarding the Christian expulsion of the Muslims. The stories about the battle are first found centuries after it allegedly occurred; according to them, it was fought near Clavijo between Christians, led by Ramiro I of Asturias, and Muslims, led by the Emir of Córdoba.

In the legend, James, son of Zebedee, an Apostle of Jesus, and future Saint James/Santiago, who died 800 years earlier, suddenly appeared and led an outnumbered Christian army to gain its victory. He became the patron saint of Spain and is known to Spaniards as Santiago Matamoros . Aspects of the historical Battle of Monte Laturce were incorporated into this legend, as Claudio Sánchez-Albornoz demonstrated in 1948. The date originally assigned to the battle, 834, was changed in modern times to 844 to suit the inherent contradictions of the account. The day is sometimes given as 23 May.