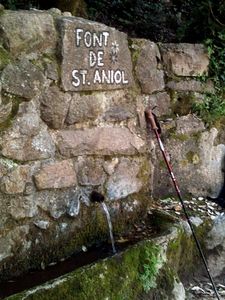 Sant Aniol d'Aguja is a Benedictine monastery which was very popular with pilgrims. Pilgrims to the monastery have been replaced by hikers attracted by the natural beauty of the valley, which bears the same name. The Romanesque building dates from the 11th century. The interior contains a step ramp which leads to a crypt with an underground chapel carved into the rock, known as the Cave of the Abbot. Its walls have flowing water which contains, according to tradition, healing properties.