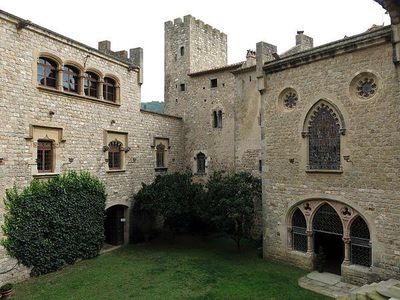 The Castell de Santa Florentina is an 11th-century medieval castle in Canet de Mar, Catalonia, Spain.
It was built on the foundations of an Ancient Roman villa by Guadimir de Canet . In the 16th century, it passed into the hands of Dimas Muntaner. In 1908, it hosted King Alfonso XIII, who made the castle's owner Ramon de Montaner i Vila count of Canet. In 1910, the castle was expanded and renovated by the modernist architect Lluís Domènech i Montaner, and its facade acquired some gargoyles by the sculptor Carles Flotats i Galtés. The magazine Architectural Digest covered the castle as among the "most beautiful houses in the world" in 1998 on account of its harmonious fusion of Gothic and Modernist designs.