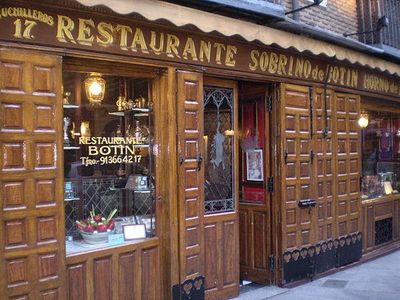 Sobrino de Botín , founded in 1725, is the oldest restaurant continuously operating in the world, according to the Guinness Book of Records. The artist Francisco de Goya worked in Cafe Botin as a waiter while waiting to get accepted into the Royal Academy of Fine Arts. The restaurant is mentioned in an Ernest Hemingway novel and the book Fortunata y Jacinta by Benito Pérez Galdós .

The restaurant was founded in 1725 by Frenchman Jean Botin and his wife, and was originally called Casa Botín. It was inherited by a nephew called Candido Remis and had a name change to Sobrino de Botín, which survives to this day. Sobrino is the Spanish word for nephew.