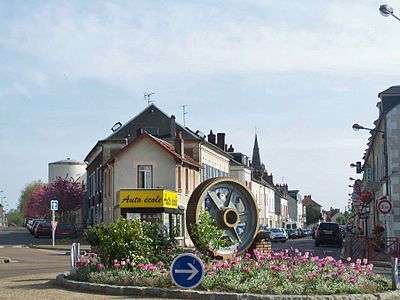 In 1819 Boigues & Fils, iron merchant in Paris, and M. Labbé, decided to find a new site on the Loire for their iron foundry to which it would be easier to transport coal, and decided on Fourchambault. A dock was built for cargo boats, and the Loire provided water for the steam engines. Construction of the factory at Fourchambault began in 1821. The Charbonnières Raveaux and Cramain furnaces became annexes to the new building, and Boigues & Fils collected several furnaces from Nivernais and Berry. Manufacturing began in 1822. Almost 3,000 workers from the surrounding countryside were employed in the cast iron foundry.
The Société de Commentry, Fourchambault et Decazeville was formed in 1853 through a merger of the Fourchambault foundry, Imphy steelworks, Montluçon foundry and Commentry colliery. In 1954 the company was renamed the Société métallurgique d'Imphy. In 1968 it was merged with the Société des forges et aciéries du Creusot, which in 1971 became Creusot-Loire. The combined company was in turn absorbed by Creusot-Loire in 1971. The Creusot-Loire group was liquidated in December 1984.