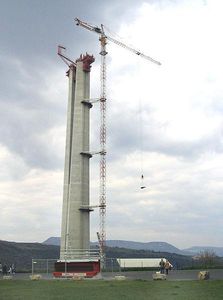 The Millau Viaduct is a multi-span cable-stayed bridge completed in 2004 across the gorge valley of the Tarn near Millau in Southern France. The design team was led by engineer Michel Virlogeux and English architect Norman Foster. As of September 2020, it remains the tallest bridge in the world, having a structural height of 336.4 metres .
The Millau Viaduct is part of the A75–A71 autoroute axis from Paris to Béziers and Montpellier. The cost of construction was approximately € 394 million . It was built over three years, formally inaugurated on 14 December 2004, and opened to traffic two days later on 16 December. The bridge has been consistently ranked as one of the greatest engineering achievements of modern times, and received the 2006 Outstanding Structure Award from the International Association for Bridge and Structural Engineering.