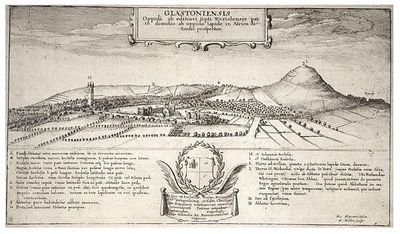 Glastonbury () is a town and civil parish in Somerset, England, situated at a dry point on the low-lying Somerset Levels, 23 miles south of Bristol. The town, which is in the Mendip district, had a population of 8,932 in the 2011 census. Glastonbury is less than 1 mile across the River Brue from Street, which is now larger than Glastonbury.

Evidence from timber trackways such as the Sweet Track show that the town has been inhabited since Neolithic times. Glastonbury Lake Village was an Iron Age village, close to the old course of the River Brue and Sharpham Park approximately 2 miles west of Glastonbury, that dates back to the Bronze Age. Centwine was the first Saxon patron of Glastonbury Abbey, which dominated the town for the next 700 years. One of the most important abbeys in England, it was the site of Edmund Ironside's coronation as King of England in 1016. Many of the oldest surviving buildings in the town, including the Tribunal, George Hotel and Pilgrims' Inn and the Somerset Rural Life Museum, which is based in an old tithe barn, are associated with the abbey. The Church of St John the Baptist dates from the 15th century.