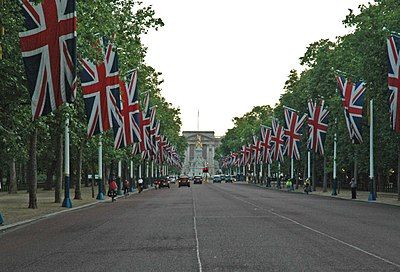 The Mall () is a road in the City of Westminster, central London, between Buckingham Palace at its western end and Trafalgar Square via Admiralty Arch to the east. Before it terminates at Whitehall it is met by Horse Guards Road and Spring Gardens where the Metropolitan Board of Works and London County Council were once based. It is closed to traffic on Sundays, public holidays and on ceremonial occasions.
The Mall began as a field for playing pall-mall. In the 17th and 18th centuries it was a fashionable promenade, bordered by trees.