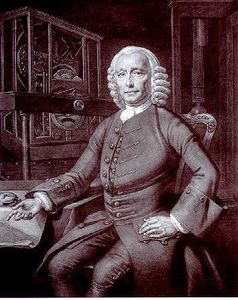 Until 1760, there were no accurate clocks who could travel over sea. In 1707, a large part of the English fleet had been wrecked on a reef. This triggered the Admiralty. They promissed a reward of £ 20,000 for a more reliable chronometer. In 1736, the unknown watchmaker John Harrison created Timekeeper No. 1. The clock was about one meter high and weighed 36 kg. The Admiralty found the monster too big and clumsy. So the brilliant Harrison built in 1760 a new one.

Eleven years later the chronometer was proven at sea and Harrison received the promised £ 20,000.