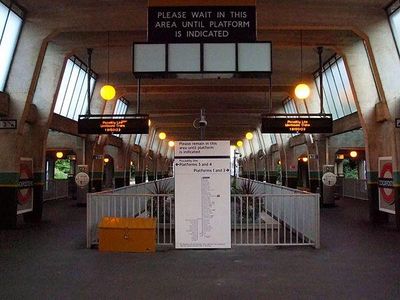 Cockfosters is a London Underground station on the Piccadilly line, for which it is the northern terminus. The station is located on Cockfosters Road approximately nine miles from central London and serves Cockfosters in the London Borough of Barnet, although it is actually located a short distance across the borough boundary in the neighbouring London Borough of Enfield. The station is in Travelcard Zone 5 and the next station south-east is Oakwood.

The station opened on 31 July 1933, the last of the stations on the extension of the line from Finsbury Park to do so and four months after Oakwood station opened. Prior to its opening, Trent Park and Cock Fosters were suggested as alternative station names. The original site hoarding displayed the name as a single word.