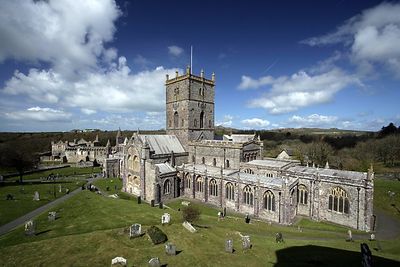 A peculiar legend is linked to the cathedral of St. David. Gerald of Wales (Giraldus Cambrensis) in the 13th century relates the strange story of a marble footbridge leading from the church over the Alun rivulet in St Davids. The marble stone was called "Llechllafar" ("the talking stone") because it once spoke when a corpse was carried over it to the cemetery for interment. The effort of speech had caused it to break, despite its size of ten feet in length, six in breadth and one in thickness. This bridge was worn smooth due to its age and the thousands of people who had walked over it, however the superstition was so great that corpses were no longer carried over it. This ancient bridge was replaced in the 16th century and its present whereabouts is not known.

Another legend is that Merlin had prophesied the death on Llechllafar of an English king, conqueror of Ireland, who had been injured by a man with a red hand. King Henry II, whilst on a pilgrimage to Saint Davids, having come over from Ireland, heard of the prophecy and crossed Llechllafar without ill effect. He boasted that Merlin was a liar, to which a bystander replied that the King would not conquer Ireland and was therefore not the king of the prophecy. This turned out to be true, for Henry never did conquer the whole of Ireland.

St. Davids and the Cathedral Close