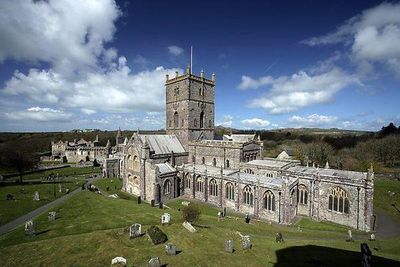 St Davids Cathedral is situated in St Davids in the county of Pembrokeshire, near the most westerly point of Wales.

The monastic community was founded by Saint David, Abbot of Menevia, who died in 589. Between 645 and 1097, the community was attacked many times by raiders, including the Vikings; however it was of such note as both a religious and an intellectual centre that King Alfred summoned help from the monastic community at St Davids in rebuilding the intellectual life of the Kingdom of Wessex. Many of the bishops were murdered by raiders and marauders, including Bishop Moregenau in 999 and Bishop Abraham in 1080. The stone that marked his grave, known as the "Abraham Stone", is intricately carved with early Celtic symbols and is now on permanent display within the Cathedral Exhibition at Porth-y-Tŵr.