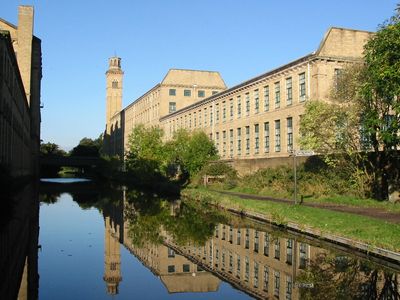 Saltaire is a Victorian era model village. UNESCO has designated the village as a World Heritage Site, and it is a so-called Anchor Point of the European Route of Industrial Heritage.

Saltaire was founded in 1853 by Sir Titus Salt, a leading industrialist in the Yorkshire woollen industry. The name of the village is a combination of the founder''s surname with the name of the river. Salt moved his entire business (five separate mills) from Bradford to this site near Shipley partly to provide better arrangements for his workers than could be had in Bradford and partly to site his large textile mill by a canal and a railway.

In December 2001, Saltaire was designated a World Heritage Site by UNESCO.

Saltaire has been called a "village of parliamentarians" as it was uniquely home to members of three different assemblies: Lord Wallace of Saltaire (House of Lords), Richard Corbett MEP (European Parliament) and, until 2005, Chris Leslie MP (House of Commons). Titus Salt was himself an MP for three years.