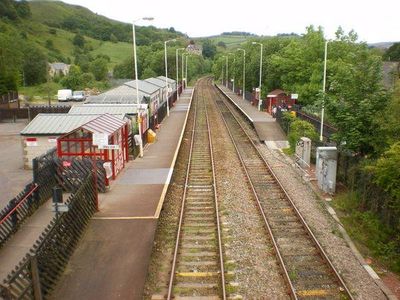 Walsden railway station serves the village of Walsden, Todmorden in West Yorkshire, England, on the edge of the Pennines.

It is served by the Caldervale Line operated by Northern. The station is 32 miles west of Leeds and 17.25 miles north east of Manchester Victoria. Walsden is the last station before the boundary with Greater Manchester. The station was opened by Metro on 10 September 1990 as a replacement for an earlier structure that closed on 6 August 1961. This earlier station, which was opened in 1845 by the Manchester & Leeds Railway, predecessor of the Lancashire & Yorkshire Railway, was situated between the level crossing and the north portal of Winterbutlee Tunnel, a few yards south of the present station.