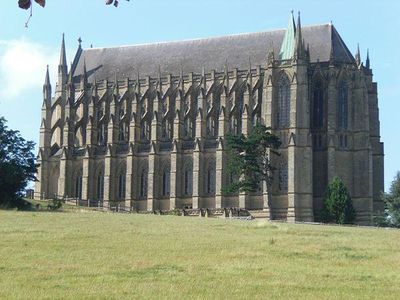 Lancing is a village and civil parish in the Adur district of West Sussex, England, on the western edge of the Adur Valley. It occupies part of the narrow central section of the Sussex coastal plain between smaller Sompting to the west, larger Shoreham-by-Sea to the east and the parish of Coombes to the north. Excluding definitive suburbs it may have the largest undivided village cluster in Britain. However, its economy is commonly analysed as integral to the Brighton/Worthing/Littlehampton conurbation. Its settled area beneath the South Downs National Park covers 3.65 square miles , the majority of its land.

It is a mix of no more than mid-rise coastal urban homes and farms and wildlife reserves on northern chalk downs. The oldest non-religious buildings date to around 1500 CE. The 2002 population was around 19,000, being measured at 18,810 in the 2011 Census. The 2011 Census included the population of Coombes