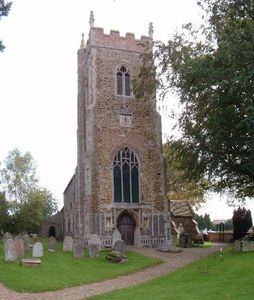 West Winch is a civil parish in the English county of Norfolk.
It covers an area of 8.02 km2 and had a population of 2,596 in 1,068 households at the 2001 census, the population increasing to 2,734 at the 2011 census.
For the purposes of local government, it falls within the district of King's Lynn and West Norfolk.

West Winch is situated on the A10 several miles south of the town of King's Lynn. The most celebrated feature is a windmill that was restored from dereliction between 1973 and 1980 and is now complete with sails. Cartoonist Osbert Lancaster is buried in the church graveyard, having previously opened the William Burt Social Club in 1974. A plaque on the club's wall commemorates this event. A range of recycling facilities are adjacent to the club. West Winch Primary School received a 'good' rating from Ofsted in 2014.