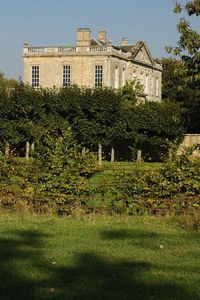 Bruern or Bruern Abbey is a hamlet and civil parish on the River Evenlode about 6 miles north of Burford in West Oxfordshire. The 2001 Census recorded the parish population as 62.
In 1147 Nicholas Basset founded a Cistercian Abbey here as a daughter house of Waverley Abbey in Surrey. The Abbey held property in west Oxfordshire, east Gloucestershire and at Priddy in Somerset. In 1382 the abbey also bought the manor of Fifield, Oxfordshire. The abbey was dissolved in October 1536.