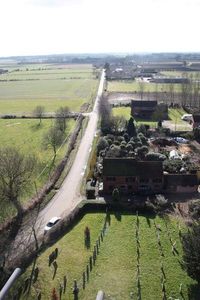 Harby is the easternmost village in the English county of Nottinghamshire. The nearest city is Lincoln, over the border in Lincolnshire. According to the 2001 census it had a population of 289, increasing to 336 at the 2011 Census.
The parish church of All Saints' was built in 1875–1876 in Early English style. In the east wall of the tower is a statue in memory of Eleanor of Castile, Queen Consort of King Edward I of England, who died at the nearby house of Richard de Weston on 28 November 1290. The moated site of Weston's house is to the east of the church. The Queen's body was transported to London for burial. The King ordered Eleanor crosses to be built at each place where her body had rested overnight on the journey.