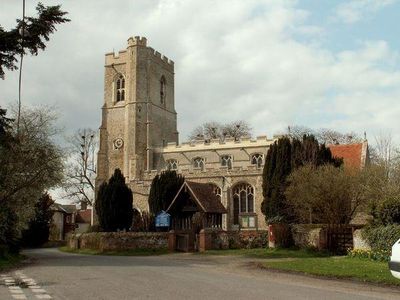 Great Waldingfield is a village and civil parish in the Babergh district of Suffolk, England about two miles north-east of Sudbury and two miles south-west of its sister village, Little Waldingfield. The village is split into two separate parts; the older and smaller part around the St. Lawrence Church, and the newer and larger section along the B1115 road between Sudbury and Hadleigh. Most of the houses in the newer section were built after World War II, including much council housing. The population is estimated to be 1,460, reducing to 1,431 at the 2011 Census. The parish also includes the hamlet of Upsher Green.
The village hall was the normal location of the halfway feeding station on the Dunwich Dynamo overnight bicycle ride until 2010, whilst an episode of Lovejoy was filmed in the village.