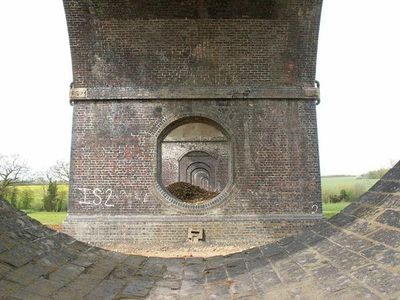 Souldern is a village and civil parish in Oxfordshire about 7 miles northwest of Bicester and a similar distance southeast of Banbury. The parish is bounded to the west by the River Cherwell and to the east by field boundaries. Its northern boundary is Ockley Brook, a tributary of the Cherwell that forms the county boundary with Northamptonshire. The parish's southern boundaries are the main road between Bicester and Adderbury and the minor road between Souldern and Somerton. The 2011 Census recorded the parish's population as 370.
The Domesday Book of 1086 does not mention Souldern. Early in the 12th century Jordan de Say, a Norman nobleman who owned the manor of Kirtlington, seems also to have owned Souldern. He married his daughter Eustache or Eustachia to Hugh FitzOsbern , by whom the manor became part of the honour of Richard's Castle in Herefordshire. Hugh and Eustache's sons took their mother's surname de Say, and overlordship of the Honour of Richard's Castle, including Souldern, remained with the family until about 1196, when their grandson Hugh de Say died leaving Richard's Castle to his daughter Margaret. She married three times and the castle eventually passed to the heirs of her second husband Robert Mortimer. The Mortimers kept the castle until Hugh Mortimer died in 1304, leaving it to his daughter Joan. Joan married twice and with her second husband Richard Talbot had a son, John, who was recorded as overlord of Souldern in 1346.