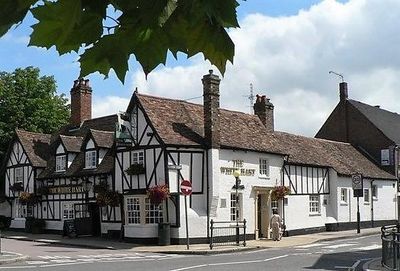 Biggleswade is a market town and civil parish in Central Bedfordshire, part of the ceremonial county of Bedfordshire, England. It lies on the River Ivel, 11 miles south-east of Bedford. Its estimated population was 20,200 in mid-2017, its growth encouraged by good road and rail links to London. The King's Reach development, begun in 2010, will provide 2,000 new homes to the east of the town.
Evidence of settlement in the area goes back to the Neolithic period, but it is likely that the town as such was founded by Anglo-Saxons. A gold Anglo-Saxon coin was found on a footpath beside the River Ivel in 2001. The British Museum bought the coin in February 2006 and at the time, it was the most expensive British coin purchased. A charter to hold a market was granted by King John in the 13th-century. In 1785 a great fire devastated the town. The Great North Road passed through until a bypass was completed in 1961. A railway station was opened in 1850. From the 1930s to the late 1990s, manufacturing provided a significant amount of employment. The town centre today is designated as a conservation area.