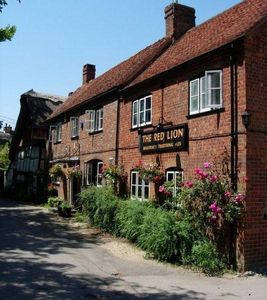 Blewbury is a village and civil parish at the foot of the Berkshire Downs section of the North Wessex Downs about 4 miles south of Didcot, 14 miles south of Oxford and 50 miles west of London. It was part of Berkshire until the 1974 boundary changes transferred it to Oxfordshire. The 2011 Census recorded the parish's population as 1,581.
A number of springs rise at the foot of the escarpment of the downs. Some springs feed a small lake called the Watercress Beds, where watercress used to be grown. From here and elsewhere tributaries feed the Mill Brook which carries the water to the Thames at Wallingford. The A417 road runs along below the escarpment above the springs and through the south of the village. The Blewbury citizens are often called Blewbarians.