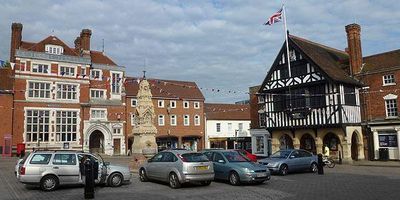 Saffron Walden is a market town in the Uttlesford district of Essex, England, 12 miles north of Bishop's Stortford, 18 miles south of Cambridge and 43 miles north of London. It retains a rural appearance and some buildings of the medieval period. The 2001 parish population of 14,313 had risen to 15,504 by the 2011 census.
Archaeological evidence suggests continuous settlement on or near the site of Saffron Walden from at least the Neolithic period. It is believed that a small Romano-British settlement and fort – possibly in the area round Abbey Lane – existed as an outpost of the much larger settlement of Cestreforda to the north.