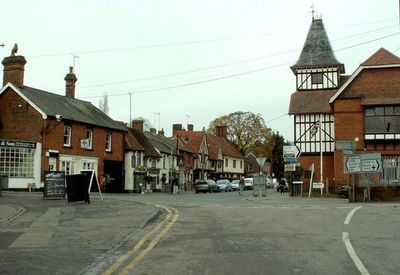 Stansted Mountfitchet is an English village and civil parish in Uttlesford district, Essex, near the Hertfordshire border, 35 miles north of London. According to the 2001 census it had a population of 5,533, increasing to 6,011 at the 2011 census. The village is served by Stansted Mountfitchet railway station.
Stansted Mountfitchet is situated in north west Essex near the Hertfordshire border and 3 miles north of Bishop's Stortford. Stansted Airport is 2 miles from the village. The village has three primary schools Primary School and Magna Carta Primary Academy), and one high school which was renamed the Forest Hall School in September, 2013.