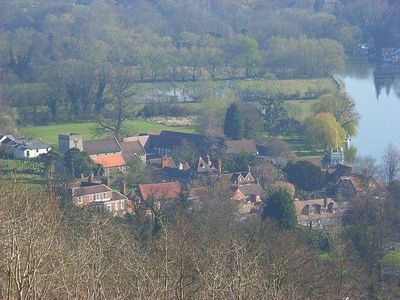 Streatley is a village and civil parish on the River Thames in Berkshire, England. The village faces Goring-on-Thames. The two places share in their shops, services, leisure, sports and much of their transport; across the river is Goring & Streatley railway station and the village cluster adjoins a lock and weir. The west of the village is a mixture of agriculture and woodland plus a golf course. The village has a riverside hotel. Much of Streatley is at steeply varying elevations, ranging from 51m AOD to 185m at Streatley Warren, a hilltop point on its western border forming the eastern end of the Berkshire Downs. This Area of Outstanding Natural Beauty is topped by the 87-mile The Ridgeway path, which crosses the Thames at Goring and Streatley Bridge.

Streatley is centred 9 miles north-west of Reading and 17 miles south of Oxford. Its developed area occupies half of the narrow Goring Gap on the River Thames and is directly across the river from the Oxfordshire village of Goring-on-Thames. The two villages are connected by Goring and Streatley Bridge, with its adjacent lock and weir, and are often considered as a single settlement: Goring & Streatley railway station on the Great Western Main Line is in Goring and serves both villages.