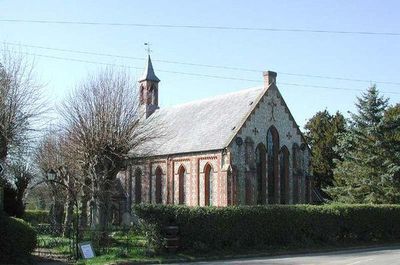 Flaunden is a village in Hertfordshire, England, on the border with Buckinghamshire. It is in the civil parish of Bovingdon. Old Flaunden was on the banks of the River Chess in Buckinghamshire but owing to constant flooding was moved up the hill into Hertfordshire in the early 19th century. The new church at the top of the hill was built in 1838 and was designed by Sir George Gilbert Scott.
Flaunden has two pubs: The Bricklayers Arms and The Green Dragon which is a Grade II listed public house dating from the early 17th century. It is on the Campaign for Real Ale's National Inventory of Historic Pub Interiors.